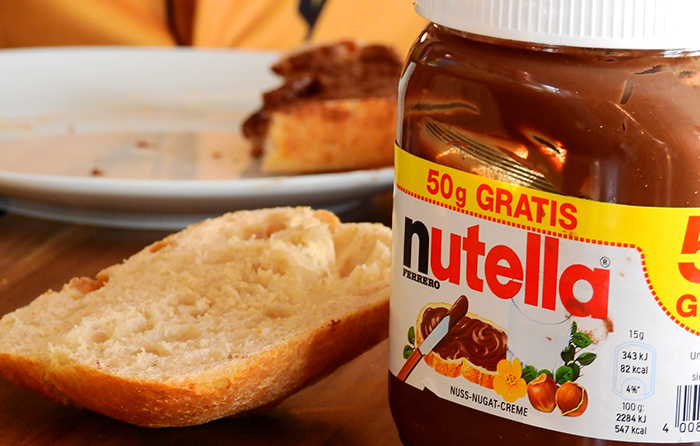 Nutella has been around for years and is still going strong. And, if public indicators are anything to go by, we can be certain that Nutella will still be around being just as popular as it is today when our kids grow up. Recent scientific discoveries about Nutella have raised some concerns: it contains palm oil, which, when broken down under high heat (which is necessary to eliminate its color and odor before being added to the Nutella mix), certain compounds are produced, which have been found to cause a higher incidence of kidney issues and tumors in rats. The manufacturers have also backed up their processing, refusing to replace palm oil, and adding that they eliminate risks as much as possible. Which brings us to the question: should you be consuming Nutella when pregnant, given the apparent risks?

Of course, you can!

The answer is a simple, resounding, yes. Nothing, absolutely nothing, states definitively that Nutella causes cancer. Even the scientists involved in the testing procedures agreed that the results were, so far, circumstantial at best, and more tests need to be conducted before a definite verdict can be given on Nutella and its carcinogenic properties. The WHO has recognized the risks associated with Nutella, but it is clearly not dangerous enough to be banned from consumption; after all, palm oil is the staple food in multiple countries where the cancer incidence rate is no higher than the other, non-palm oil glugging nations.

No allergies, no fear

To cut the long story short, there is no harm in eating Nutella as long as you do not have any nut allergies. If you have always been allergic, Nutella is probably out of the question for you anyway. Sometimes, some women become sensitive to some foods after becoming pregnant. The best thing to do would be to get tested for allergies before dipping into the tempting jar.

Gestational diabetes is a risk

Of course, there are some risks associated. As we all know, what makes Nutella so delicious and addictive is not the responsibly processed palm oil it contains, but the hazelnut paste and the ridiculous amounts of sugar. About half the Nutella jar is composed of sugar, which is saying a lot. Sugar in large amounts is extremely detrimental to everyone’s health, and even more so of the pregnant woman. Apart from the tooth decay and weight gain, the most direct impact of excessive sugar consumption is the onset of gestational diabetes. This is a very rare but very deadly form of diabetes that sets in with pregnancy and is gone as soon as the baby is born. This can lead to early births, miscarriages, and even stillbirths. If you are already diabetic, avoid altogether; if not, eat in moderation.

Another very possible side effect of an immoderate Nutella consumption is, of course, weight gain. Nutella is made of a hazelnut puree, which contains quite a bit of cholesterol and ample fats. Add to that the sugar, and you have the last thing you want to be addicted to. Now, while it is advisable that you gain some weight during your pregnancy, putting on too many pounds will lead to multiple and completely unnecessary complications. So, keep your consumption to a few spoonfuls a week, and balance it with ample fibers and proteins.

Also read: Can I eat peanut butter during pregnancy?

In short, there is nothing wrong with eating some Nutella while you are pregnant. Eat a spoonful when you get a sweet craving or have some old school, spread between two slices of multigrain bread. Spread it on a low sugar cookie if you want, or mix some up in a fruity ice cream for some guilty pleasure.